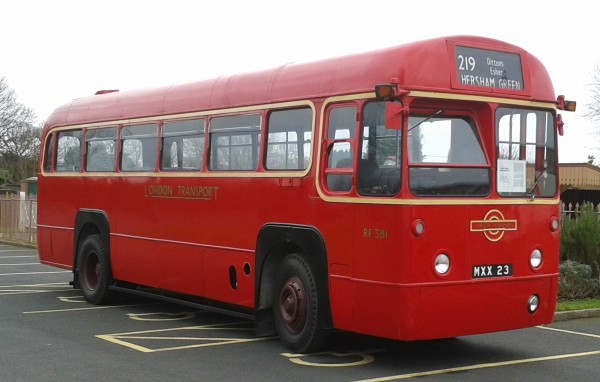 Comparatively few buses could be built during the Second World War (1939-45). Between 1947 and 1954 around 7000 RT class double-deck buses were built for London Transport to replace the worn-out existing fleet and complete the tramway replacement. New double-deckers were the first priority but, at last, the single-deck fleet was almost entirely renewed between 1951 and 1953 with 700 of these AECs. The big contract was one of the earliest for the new underfloor-engined single-decker designs introduced by the big manufacturers, some years behind Midland Red.

These buses, known in London as the RF class, were very robustly constructed and had long lives. Like the RT, they had a preselector gearbox coupled to a powerful engine. They were originally operated with conductors but were eminently suitable for conversion to driver only operation.

RF 381 was delivered in January 1953 and first allocated to Sutton garage. As usual with London Transport, bodies were separated from chassis during overhaul and the chassis would re-enter service with another body. It was converted to a driver only vehicle during its May 1965 overhaul. It received its last major overhaul in May 1972 when nearly 20 years old and ran until March 1979. It was sold for preservation and passed to this Museum in 1994; it has since been repainted and, after much mechanical work, is now part of our Class V fleet.