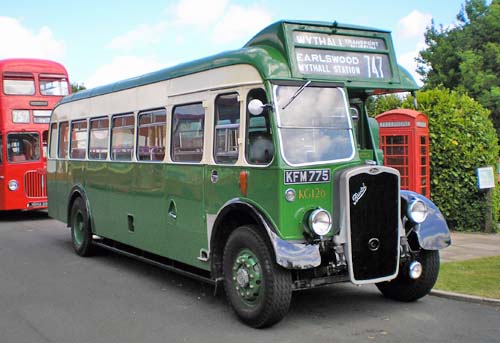 The early postwar Labour government was committed to nationalising industry, including transport. The Tilling companies, together with their in-house chassis builder Bristol and bodybuilder Eastern Coach Works voluntarily sold out to the state in 1948 rather than wait for compulsory nationalisation and possibly a worse price. The rest of the bus industry basically remained in municipal or private hands and, for the next twenty years, around half the country's company buses were in state ownership. Nearly all their requirements were met by Bristol and ECW who were not permitted to supply outside the state sector. The Bristol/ECW combination thus became synonymous with certain operators. Standardised designs had entered production in 1946 and this example is a typical single-decker.

Crosville Motor Services was a major operator in Merseyside and North Wales. Between 1946 and 1950 almost 150 of these Bristol L types entered service, to be followed in 1950-2 by nearly 100 LL and LWL types which looked similar but were built to the newly permitted length of thirty feet (an increase of 2.5 feet). Crosville was unusual in favouring the AEC 7.7 litre engined variant for many of them but KFM is more typical of deliveries across the country with its 7 litre Gardner 5LW 5-cylinder engine. Others had the remaining variant, the Bristol AVW 8 litre engine.

KFM 775 entered service on 6 June 1950 at Bangor depot and ran on services to Caernarfon and areas such as the Isle of Anglesey. It was unsuitable for one-man operation and thus moved in the mid-60s to Wrexham until withdrawn in April 1969. It accumulated 575,000 miles in its service life. It found new owners after withdrawal and passed to Wythall in 1977. Fortunately its basic structure was sound. Significant alterations were to reinstate the classic Tilling style front and rear destination displays which evidently had been far too generous for Crosville to tolerate for long!