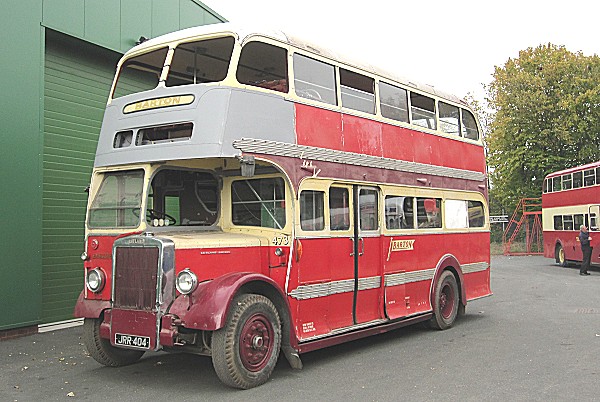 Nottingham-based Barton Transport was a rare example of a large independent operator during the time most fleets were either in the hands of councils or the state. Its fleet was legendary until the 1970s for its variety. Many were secondhand Leylands, often extensively rebuilt to give many additional years of service. Buses bought new generally incorporated unusual design features.

A large contract was for 40 Leyland PD1 chassis with Duple coachwork although delivery was extended over 1947 to 1949. The PD1 was a new postwar design which, although very sound, was soon eclipsed by another new model, the bigger engined PD2. It was Barton's specification for the Duple bodies, however, that was so exceptional. Based on bodies supplied to Barton in 1939-42, they had side gangways in the upper saloon which permitted a height reduction. This was not unusual but combining it with a front entrance was. The high quality specification included air operated double doors, heaters and a clock. Fleetnames were either cast in metal or, front and rear, illuminated. Liberal use of polished, fluted mouldings completed the distinctive appearance.

JRR 404 entered service as Barton no. 473 on 1 June 1948 and worked from at least the company's Nottingham and Melton Mowbray depots. The quality of Barton maintenance and overhauls meant long lives for their vehicles and 473 was not withdrawn until July 1973. It then had a number of owners until passing to the Museum in April 1982. Major engine repairs were initially required. Subsequently work has been carried out inside, centering in particular on renewing the moquette in both saloons.