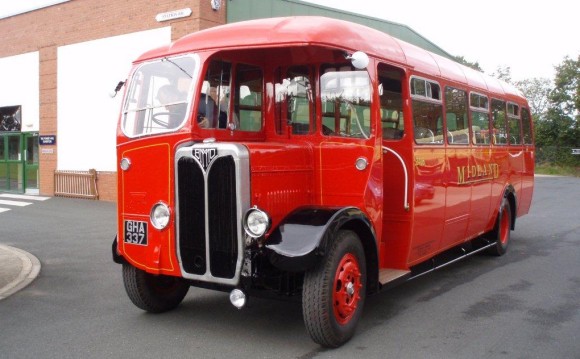 Midland Red, which served nearly every town and village across the Midlands, had to give up building its own buses and coaches during World War Two. This bus is from the last series of 50 single-deckers in production as war broke out in 1939.

Fuel could barely be spared for private cars during the war but there was a huge growth in demand to factories on war work so public transport took the strain. In 1939 Midland Red carried 210 million passengers but this increased to 327 million by 1944, despite the shortage of new buses and loss of staff to the forces. Buses were subjected to continuous heavy overloading, and shortages of maintenance staff and materials. Make-do-and-mend ideas kept them on the road. Heavy renovation was required when peace returned, the body of this bus being rebuilt by Nudd in 1950.

GHA 337 finished passenger service in 1958 and found a new career with a showman.

GHA 337 was discovered in a scrapyard at Worksop; the body was rotten but it retained most of the key mechanical parts and was bought for preservation in 1978. The bus was stored for many years as it needed total restoration, this being completed in 2012. It has been restored to 1950 condition when it received its post-war renovation.