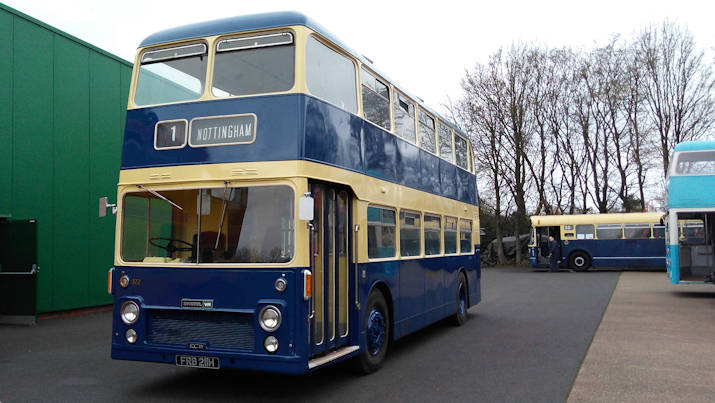 
The Bristol VR (Vertical Rear, referring to the engine location) was originally intended to have its engine positioned longitudinally on the offside, behind the rear axle. This concept would have allowed single- and double-deckers with the fullest flexibility for entrance and exit positions. The introduction of a new bus grant insisted on double-deck buses having the rear engine mounted across the rear, as on the well established Leyland Atlantean and Daimler Fleetline, killing the original concept. The production VRT (T for Transverse engine) was thus much more orthodox.

The Bristol VRT became the standard double-decker for the National Bus Company, almost inevitably paired with ECW bodywork. This VRT was one of the last delivered to Midland General before the company had to replace its distinctive traditional blue and cream with National Bus Company corporate layout. This bus briefly carried the very rare NBC dark blue before receiving the more usual poppy red. Around the same time Midland General was absorbed into the Trent company. It was returned to its original colours to celebrate a company anniversary in 1985.

It arrived at Wythall in 1990 and, after body rectification, was repainted in its attractive original colours, being repainted again in 2017.