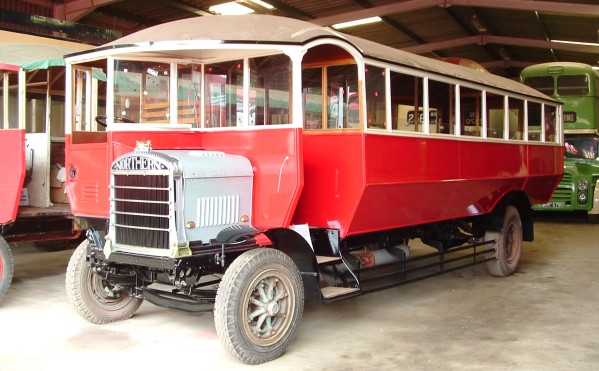 Midland Red's aim to build a lightweight bus, seating as many passengers as possible within 25 feet (7.6 metres) length, led to the SOS Queen in 1927. It was one of the lightest full-size buses ever produced, weighing just over 4 tons. Over 650 Queens and its successors were built for Midland Red and associated companies, earning a reputation for reliability.

CN 2870 was one of many supplied to the North-East England operator, Northern General Transport, entering service on 1 May 1927.
Buses rarely lasted much longer than 10 years at this time of rapid design development but, with World War Two disrupting the production of new vehicles, some Queens gave over 20 years service.

The square sided body was modernised by Northern and the addition of curved metal panels helped the vehicle to survive. It was sold in 1946 and became a caravan in Northumberland.

The Museum's predecessor society purchased it in November 1974, despite the amount of work needed. Good news in 1976 was the discovery of another Queen chassis, complete with running units. Substantial work is steadily taking place to ensure that the bus will look as it did with Northern in 1927.