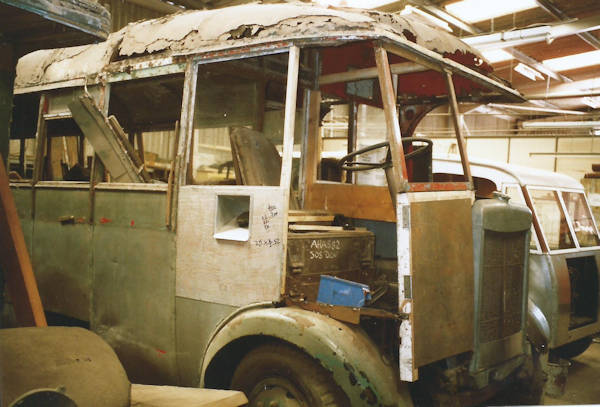 Midland Red introduced its new SOS ON model in 1934 to take advantage of the new maximum length of 27 ft 6 ins for two axle single-deck buses and coaches. As usual, maximising the number of seats was a priority. Powered by the compact SOS petrol engine, the short bonnet and longer length allowed 38 seats. Buses, however, were evolving in another respect - the economical diesel engine. SOS needed to evolve its own diesel engine and early diesel SOS buses, known as the DON model, had AEC 7.7 litre units. These were six inches longer than the SOS petrol unit and the space lost reduced capacity to 36.

Bus replacement almost halted during the Second World War in favour of building military vehicles. After the war, there was a travel boom coupled with rationing of private motoring. Midland Red met the demand but could not begin scrapping 1928-33 buses until around 1950. The 1934-9 stock clearly would need their lives extended so most had major body rebuilds. Midland Red fitted new metal sides to this one in 1949.

1703 spent much of its working life in the Leicester area. It was purchased by a Mr. Johnson in 1955 and moved to the small Gloucestershire village of Rudford. We heard of the bus in 1977 and visited the owner who still lived in the vehicle. Mr. Johnson kindly made provision for the museum to have first refusal upon his death. His family advised us the vehicle was available in February 1979 and 1703 arrived here a month later. The bus is stored as a long-term restoration job but a number of parts have been purchased, including all major mechanical units.